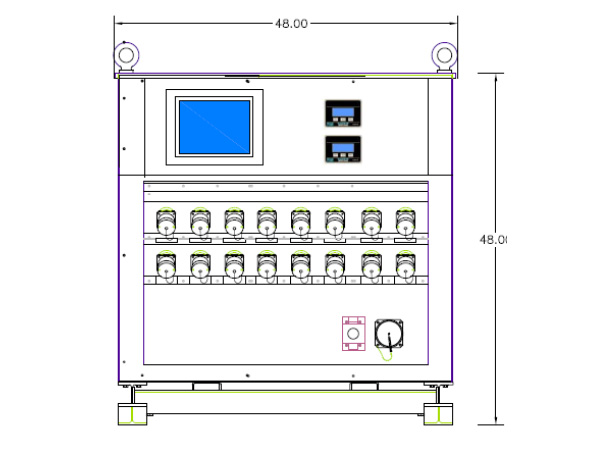 The outputs are then routed through individually controlled contactors before being made available to loads. The SDC-SM in positioned next to the SDC, interconnection done with the included connector cables.

The SDC-SM is designed to operate in conjunction with a standard SDC. The SDC-SM provides the SDC with the ability to control and monitor each individual output. Each SDC-SM contactor is tied into the controller for remote operations. Each contactor also has an associated multi-function transducer associated with it to display power quality for that output.

The SDC-SM controller allows each output to be individually programmed with a priority setting for load shedding. The Operator’s Terminal provides the operator with total system power, warnings if an individual output is approaching its limit and if the total load is approaching maximum SDC capacity. The settings may be adjusted at any time from the on board operator’s terminal. The individual output monitoring allows operators to check individual phase balancing, quickly determine which output(s) are having loading issues, and take corrective action. The onboard controller has the ability to network with other SDC-SMs and back to an optional remote monitoring system.

The SDC-SM has a transducer to monitor the connection point between the SDC-SM’s MEP input and it’s tie-in back the SDC’s MEP input connector. Using the SDC-SM MEP pass through connection transducer, the SDC-SM can immediately recognize when an SDC is operating on the reduced capacity of the MEP input.

Electrical power distribution consists of electronically controlled contactors sized to handle the outputs from the SDC. The contactors were chosen to be able to handle the extreme environments as an SDC.