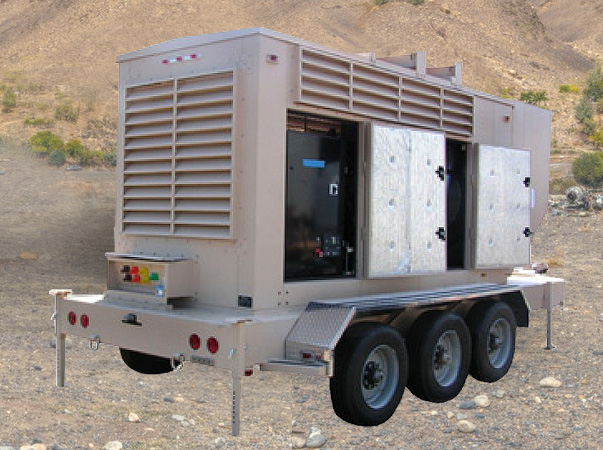 The PU500 is configured to operate alone or in parallel with other PU500 generators as prime power generators..

The PU500 is a diesel engine driven, prime power rated generator factory rated at 500KW, but environmental condition rated to produce 500 kilowatts at 480 VAC, 60 Hz with a 0.8 lagging power factor. The generator is rated to deliver 601 amps at rated output voltage.

The engine is a Volvo TAD1642GA, EPA Tier II certified engine. The engine is a 16-liter, in-line, 6-cylinder, 4-stroke electronic engine capable of producing 724 horsepower at 1800 RPM operating on DF-2 diesel fuel. To maintain a controlled working temperature in cylinders and combustion chambers, the engine is equipped with piston cooling. The engine is also fitted with replaceable cylinder liners and valve seats/guides to ensure maximum durability and service life of the engine.

Output Breaker -The output breaker is a molded case circuit breaker with an electronic trip unit. The breaker is manually operated and has a shunt trip device installed for remote tripping.

Generator Controller -The generator controller provides all the start/stop, monitoring and protection for the engine and generator.

A shunt trip command places the breaker operator in the trip-free position, requiring the breaker be moved to the open position before it may be reclosed.